The fast emerging city of Raipur is developing by leaps and bounds. New malls and restaurants are making their appearances on the canvas of the city. Equipped with its own railway station and airport, the city of Raipur has also an international cricket stadium. The state capital of Chhattisgarh the city has the advantage of being the center of political and other activities. Major concern is paid for the development of the city which is reflected in its town planning and authorized localities. A view of different localities in Raipur is enough to bring out the overview of the city.

Naya Raipur is the new city of Chhattisgarh. Connected through National Highways NH-6 and NH-43, it is 17 km south-east of current capital Raipur. Swami Vivekananda Airport separates new and old Raipur. Naya Raipur serves as the administrative capital of Chhattisgarh and also caters to the infrastructural needs of trade and industry in the region. 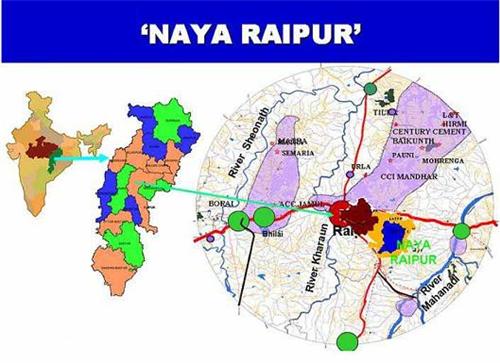 Naya Raipur is spread over an area of about 8000 hectares. It comprises 41 villages out of which 27 form the core of the Naya Raipur. The population of only one village has been displaced in the process of renovating and construction of Naya Raipur. About half of the total land acquired is being utilized for roads, parks, green belts, public conveniences, water facilities, afforestation etc. Some part of the land is be reserved for government offices, educational institutions , public auditoriums etc. Other parts will be allocated for residential and economical purposes. After Bhubaneshwar, Chandigarh and Gandhinagar the new city Naya Raipur owns the pride of being the fourth planned capital city of India.

G.E. Road is an important hub of Raipur city. Many of the important administrative offices are located here. The place also has a number of famous restaurants like Bajrang Bhoj Bhandar, Cinnamon Restaurant and Rajasthan Thali. It is frequented by tourists and locals alike. In recent time many apartments have dotted the canvas of G.E. Road. Depending upon your budget you can book any flat in this posh area of Raipur.

Station Road in Raipur has emerged as a popular destination for tourists. The area is full of mid and grand size hotels promising comfortable stay to its guest. From luxury to budget and cheap hotels you can find all and more in this part of Raipur. Further there are also restaurants and hotels to serve tourists coming from outside the city.

Malviya Road is another major locality in Raipur city. It is a major shopping area in the busy yet beautiful city of Raipur. Many showrooms and shopping stores are located in this area. You can buy everything from branded apparels to electronic items, jewelry and more. There are a number of markets and restaurants here besides educational institutions.

Vidhan Sabha Road is a popular realty hub. Many residential accommodations are coming up here. It is safe; retired people, senior citizens and single professionals can opt for this place. Apart from these Dhamtri Road, Shankar Nagar, Hirapur, Amlidhi, Avanti Nagar, V.I.P Road, Siltara Industrial Area are other famous localities in Raipur.

Raipur today stands as a symbol of positive growth. The city is ushering new projects to make it at par with all other major cities of India. With a firm hold on its history and tradition, it is marching ahead with modern times. A number of commercial projects, hospitals, educational institutions are soon going to start in Raipur. People in India and beyond are going to hear much more from this city in the near future.